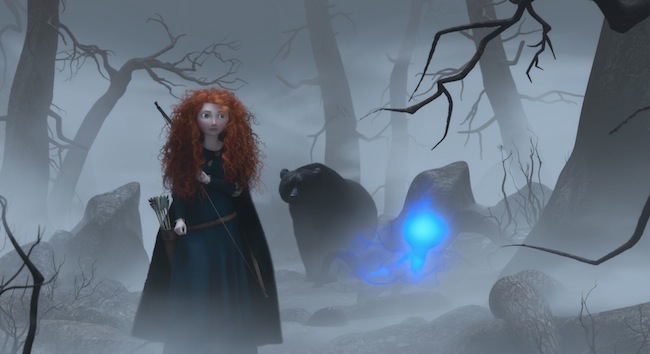 I’ll say this now: lots of this review is going to be negative, but be patient…I did enjoy this movie and will give it a not-terrible rating. I just have lots of things to say about it.

I don’t know whether to praise or criticize the people who were in charge of promoting Brave. For a year, we were shown various trailers and posters that were vague about the plot of the movie, and, for a while, the film looked very uninteresting. As in, I had absolutely no desire to see it. However, a couple of months before its release, we were finally treated to a trailer that made me a tad bit excited, resulting in me attending the midnight showing.

None of the trailers or promotional material (that I saw) gave any indication as to what the movie actually turned out to be. A good thing, usually. Judging from trailers, I thought that I would be watching this girl with a bow and arrow shoot stuff all the time and gain her freedom. The trailers were completely misleading, though; as it turned out, the bow and arrow had very little to do with the plot of the film. At first, I felt a little bit cheated…this wasn’t what I paid to see! But, as I said, I did enjoy it, though it was much different than I expected it to be.

My biggest complaint of this film is the title. Just about the only relevance that it has to the plot is a line spoken by Merida merely seconds before the end credits flash. What did she do that was brave? She didn’t take charge of her own life, she didn’t stand up against anyone (she argued with her mother, but I wouldn’t call that brave), and the main plot resulted from her running away from the castle in anguish…in other words, not brave at all. I feel like “Fate” would have been a much better title. I don’t want to give away any plot details here, but trust me: “Fate” would have been a better title.

Brave also featured several things that were very – how should I say it? – un-Disney. Bare rear ends and ample cleavage are both displayed prominently, and there’s even a moment when a toddler dives into said cleavage…very, very un-Disney.

But still, the plot, while not the one the trailers seemed to promise, was sweet, and there were lots of great moments throughout that encouraged laughter, provoked thought, and asked us to make amends with our loved ones rather than do something drastic. Brave does have its moments where it seems to rush or it gets all too predictable, but the spectacular animation, the fitting score by Patrick Doyle, and the enjoyable story make it worth the watch. Also, the animated short attached to the film, La Luna, is fantastic. I highly recommend this film to mothers and daughters especially, though boys will find things to enjoy as well.

MPAA: PG – for some scary action and rude humor

Note: I normally have no qualms with 3D films, but this film is often dark, meaning that the 3D glasses make it even darker and more difficult to see…a painful strain on the eyes. Unfortunately, both the second and third screenings I saw were presented in 3D (2D wasn’t available on the Disney cruise ship); I’m glad that I first saw it in 2D.

This entry was posted on Wednesday, August 1st, 2012 at 6:02 pm and tagged with brave, chadadada, chadlikesmovies, Disney, la luna, merida, Pixar and posted in 3, Film Reviews. You can follow any responses to this entry through the RSS 2.0 feed.
« Beauty and the Beast (1991)
Artemis Fowl: The Opal Deception (2005) – Eoin Colfer »