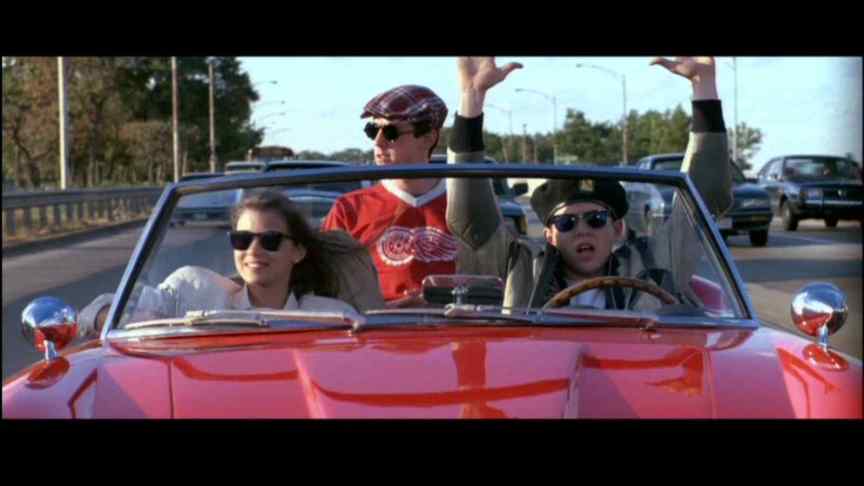 Knowing how much I enjoy movies, new and old, you may find it hard to believe that I just saw this classic for the first time tonight. I know, I know, I’m behind the times, but the important thing is that I’ve finally seen it – and I loved it!

Ferris Bueller’s Day Off is one of those rare movies that is enjoyable and loads of fun from start to finish, covering all of the stereotypical teenage dreams, from skipping school to jumping fences to joyriding in fancy sports cars. Matthew Broderick in the title role is charismatic and infectious, his charm and humor translating well between both his dialogue with his fellow on-screen actors and his quick side comments to the audience through the fourth wall – a gag that never feels forced or strange. In fact, it’s Broderick’s performance that makes this film work so well; I can’t picture a single actor who could have pulled this off as well as Broderick did.

Broderick isn’t the only actor who shines, though. Jeffrey Jones as Dean Rooney is quirky and amusing. One of the funniest moments of the film is his reaction after talking to “Mr. Peterson” on the phone. He is malicious, scheming, and the only adult suspicious of Ferris. He’s a man who takes his job too seriously…so seriously that he nearly gets himself killed just by trying to catch a kid playing hooky. It’s Rooney’s antics that bring much of the comedy to the film.

The main themes of the film – pursuing freedom and having fun – are pretty obvious, but they aren’t shoved in the faces of the audience, either. Another theme that may not appear as obvious is the theme of finding self-worth. Bueller doesn’t take the day off just for himself, but for his friend Cameron as well, who lives with, to put it simply, awful parents. By the end of the day, Cameron has learned that it is important to realize that your worth as a person isn’t determined by the people around you but rather by your opinion of yourself. Deep themes for a simple enough comedy film.

It was hard to look at Ferris Bueller’s Day Off objectively when I already knew that it was considered a classic, but I don’t think that not knowing that would change my opinion of it; this film is just one of the few that manages to appeal to nearly everyone who watches it, perhaps because we all feel the need to take that one day to drop our responsibilities and just do whatever the heck we want. Ferris helps us to live that out with him and have just as much fun along the ride. Well-deserving of its spot as one of the greatest comedy films of all time, Ferris Bueller’s Day Off is film fun that is hard to beat.

MPAA: PG-13 – for language and some sensuality

Note: As a warning to those few who haven’t seen it, there is a lot of swearing in this film.

This entry was posted on Thursday, August 9th, 2012 at 12:31 am and tagged with Bueller, chadadada, chadlikesmovies, Dean Rooney, Ferris Bueller, Ferris Bueller's Day Off, Jeffrey Jones, John Hughes, Matthew Broderick, MPAA and posted in 4, Entertainment, Film, Film Reviews, Movies. You can follow any responses to this entry through the RSS 2.0 feed.
« A Bug’s Life (1998) – Randy Newman
Tangled (2010) – Alan Menken »