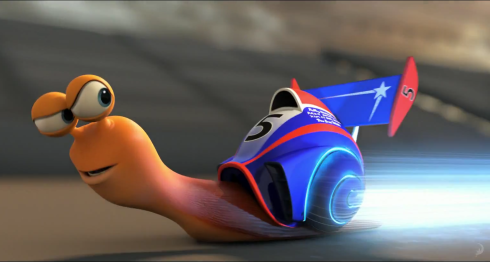 I must preface this review by saying that I had decided this film was going to be awful before I ever saw it, based on the trailers alone. While watching, however, I did my very best to remain objective and to base my opinion of the film entirely on the film itself rather than on my preconceived notions. Of course, this is impossible unless the film had strongly convinced me to think contrarily to my initial thoughts, which it didn’t. So here’s my review of Turbo.

The trailers for this film told this story: a snail (Ryan Reynolds) dreams of being fast, but, alas, he’s a snail, which means he’s slow. However, upon accidentally getting sucked into a car engine in the middle of a street race, the snail swallows some nitrous oxide, causing his DNA to alter, making him super fast. What better to do with his newfound speed than to enter the Indianapolis 500?

Rest assured, everyone…the film tells that exact same story promised by the trailers, albeit with a few added characters along the way. Once he becomes fast, the snail (named Theo before adopting the name “Turbo”) is captured along with his brother, Chet (Paul Giamatti), by half of a taco shop-owning brother duo, Tito, voiced by Michael Peña, who takes the two of them to participate in what appears to be a serious underground snail race with snails owned by other local down-on-their-luck shop owners. When Theo surprises all with his super-speed, Tito thinks up the idea to bring in business by introducing the world to his snail via the Indy 500.

The characters are uninspired, including and especially Turbo as the lead character. I didn’t care that he wanted to be fast, and I didn’t care when he became fast and (spoiler alert) wins the Indy 500. I didn’t care that his brother thought he was crazy to go race in the Indy 500 because, hey, I agreed with him. If I strapped rockets to a pair of roller blades, would that qualify me to race in the Indy 500 as well? The script doesn’t convince me that this is an absolutely necessary path to take for either Turbo to fulfill his dream or for Tito and his brother/friends to bring customers to their businesses. Speaking of Tito, his personality is so obnoxious that I didn’t care whether he succeeded in helping his brother realize his dream either. Character building is kept to a minimum, with the turnarounds of both Tito’s brother Angelo (Luis Guzmán) and Turbo’s brother Chet feeling incredibly uninspired. None of the voice acting talent stands out either, with voices from Ryan Reynolds, Paul Giamatti, Snoop Dawg/Lion, Samuel L. Jackson, Maya Rudolph, and others all falling short.

Probably my biggest problems with this film are the inconsistencies and moments of outstanding ridiculousness. For starters, the beginning of the movie features a scene of Theo (not yet fast) pushing a TV off a shelf, but when he’s “trapped” under a plastic cup later on he is powerless to do anything. The idea of a sort of tomato harvesting factory run by snails existing in a residential tomato garden, complete with tomato-rolling rails, is ludicrous. The biggest inconsistency for me is the whole issue of “speed.” Let’s do the math here: one scene prominently featured in the trailers shows Theo traveling about one foot (twelve inches) in seventeen minutes (“a new record!”). The accident where he gains his speed takes place over a highway. Even if this highway is only 1/10 of a mile away (528 feet), that would be approximately 150 hours of travel time at the “record” speed, but it takes place over a single night. That issue aside, here’s another: I’ll accept the fact that NOS gives Theo super speed, but why oh why does it give him characteristics of a car too? Headlights, a stereo system, etc. It makes no sense to me.

All in all, the best I can say about this film is that I didn’t hate it and the worst I can say is that it’s flat-out stupid. I have to admit that the ending did have my smiling a little bit, but the overall film just isn’t worth smiling at. The awful premise and the logical inconsistencies/stupid character decisions combine to make this Dreamworks title one of the company’s worst. “But it’s a kid’s movie!” I hear someone shouting at me over the Internet. “So are the Pixar films!” I say in return.

MPAA: PG – for some mild action and thematic elements