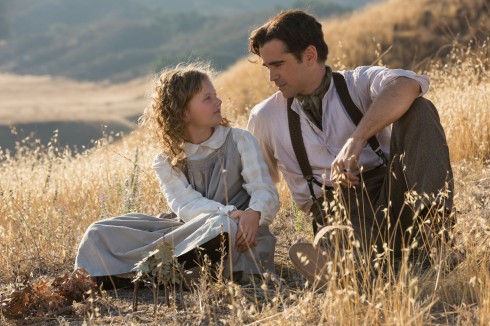 It seems that biographical films are often more dramatic and heavy than they are light-hearted and fun, and even rarer are they both at the same time, but Saving Mr. Banks manages to pull it off quite well without seeming forced or bipolar.

Saving Mr. Banks is the true story of the making of the Disney film Mary Poppins and the reluctance of the author of the books it is based on, P. L. Travers (Emma Thompson), to relinquish the film rights to her characters. When she visits Los Angeles to meet with the film’s creative team and with Walt Disney himself (Tom Hanks), heads clash as the fight to keep the heart of her story and her characters become flashbacks for Travers, revealing the events of her childhood that inspired her beloved Mary Poppins.

The obvious star of this movie is Emma Thompson as the stubborn P. L. Travers, whose money is disappearing and desperately needs for this film to be made in order to help her out financially. Unfortunately, she refuses even the slightest deviations from the way she had the story and characters composed in her head, and Thompson’s portrayal does a fantastic job of making the character both frustrating and, in the right moments, comedic. The character’s quirky way of dealing with various people and circumstances, such as the surprise of the endless Disney stuffed animals waiting for her in her hotel room, are often hysterical, but her moments of grief in response to various flashbacks to her father (Colin Farrell) are even more heartbreaking…in a good way. Farrell’s performance is the other highlight of the film, with his role as her father, Travers Goff, bringing even more joy and more heartbreak. There is a juxtaposition of a happy-go-lucky father with a down-on-his-luck drunk within the character, which Farrell does an outstanding job of portraying.

Tom Hanks does a pretty good job as well, but I couldn’t help but feel like I was watching Tom Hanks pretending to be Walt Disney rather than simply watching Walt Disney himself, probably through no fault of his own. I was impressed by the tiny details he got right, such as the tell-tale cough that hinted at the lung cancer that would lead to his death less than three years after the premiere of the film in 1964, but the fact that it was Hanks playing Disney just couldn’t get out of my head. Perhaps this is because he doesn’t look much like Disney, whose face I’m quite familiar with, which, as I said, isn’t his fault. Really, this is a minor complaint that doesn’t detract from the film – just a slight disappointment. Another petty disappointment was with the portrayal of the legendary Sherman Brothers, Richard (Jason Schwartzman) and Robert (B. J. Novak), the duo responsible for some of the most classic Disney songs of all-time, including but not limited to “it’s a small world (after all),” “Supercalifragilisticexpialidocious” (which I proudly just typed correctly without help), and “There’s a Great Big Beautiful Tomorrow.” Aside from the fact that I thought that they could have hired better singers, I think part of my slight disdain for B. J. Novak, whose character in NBC’s The Office television series I dislike quite a bit. (Told you it was petty.) Again, though, this doesn’t really make me enjoy the film any less because, aside from the excellent performances of Thompson and Ferrell, we are treated with great performances from Paul Giamatti, Bradley Whitford, and Annie Rose Buckley, who plays P. L. Travers as a child in the flashbacks.

I purchased the soundtrack for this film a couple of weeks before I was able to see it in theaters, and I must admit that I was initially pretty unimpressed. Sure, it sounds pretty, but it’s a Thomas Newman score that sounds like a typical Thomas Newman score, in the same vein as his scores for Finding Nemo and The Help (my review). However, I reserved judgment as best I could until I had heard the music in the context of the film, and, thankfully, it works much better as a supplement to the film, which is what really matters. (As a brief side-note, the Deluxe Edition of this soundtrack is worth the buy as it includes original demo recordings of the Sherman Brothers singing songs they composed for Mary Poppins, as well as recordings by Julie Andrews and Dick Van Dyke.)

I can’t speak to the accuracy (or inaccuracy) of the film, but, as I’ve said before, I don’t think it matters too much. A film is meant to entertain or inform, and Saving Mr. Banks does both, whether it gets all the facts correct or not. It will have you laughing and crying from the very start of the film, largely thanks to Emma Thompson’s incredible performance. It’s certainly Oscar-worthy, but whether or not she will win the Best Actress award remains to be seen. Either way, this movie is worth your money to see before it leaves theaters.

MPAA: PG-13 – for thematic elements including some unsettling images