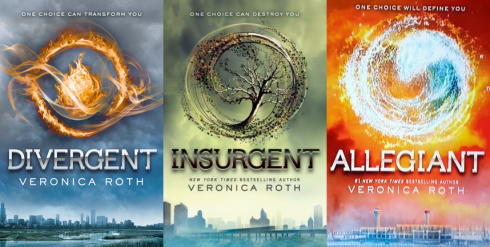 Note: This is going to be a completely spoiler-free review.

As most of you probably know by now, Veronica Roth’s Divergent trilogy is the hottest series off the Young Adult press to be adapted into a film, with the first installment set for release in just a couple of weeks. Watching the initial film trailer did absolutely nothing for me. What is this film about? Why am I supposed to care? Am I supposed to be excited? Whether the trailer made me feel it or not (it didn’t), I felt like I should be excited for this movie, so I decided to read the books to see if that built my anticipation more. And it did. Quite a bit, actually.

I initially planned to give a brief sum-up of my opinion on each book, but the fact of the matter is that I loved all three. Beatrice “Tris” Prior is a fantastic character who grows in so many ways over the course of the trilogy, and Four has fascinating complexities that keep him interesting as well. There are definitely similarities to Suzanne Collins The Hunger Gamges trilogy especially, but none of these bother me; one work of art inspires another, and I think I actually enjoyed the Divergent trilogy more anyway. (I also particularly enjoyed her reference to Orson Scott Card’s Ender’s Game with Peter, who is obviously inspired by Ender’s violent older brother with the same name.) Questions that I had in the first book – Where is the rest of the world? Who started the faction system and why? What is outside the walls of the city that needs guarding? – were all answered in time, even if it took Roth until the third book to do it.

I only have a couple of small complaints. In the first book more so than in the other two, it often seems like Tris is turning toward the metaphorical camera and saying something dramatic directly to the audience at the end of a chapter. For example, the following two sentences are the last of chapter 14 of Divergent:

I wish I could say I felt guilty for what I did.

[dramatic turn to camera] I don’t.

Obviously, the bracketed part is my addition, but you get the idea. It’s not a huge issue, but I did get the feeling that it happened a lot, like Tris needs to say something dramatic to say something about her character, but I don’t think it is necessary; Tris’ actions very clearly define her character, especially the further we advance in the books, so these dramatic moments just feel overdone. My other minor complaint is that I have no real sense of how much time has passed from the beginning to the end of the trilogy. Roth uses both “weeks ago” and “months ago” at multiple points in the series in random orders, so it is difficult for me to tell how much time is spent at each moment or location in the book. I mean, it obviously has to be long enough for certain characters to heal from injuries sustained in action, but the passage of time is not clear enough for me to follow. Again, though, this is minor – the story and character development means more than the passage of time, and, in any case, we can agree that time passes, which is all that you really need to know.

But complaints don’t really matter when everything else is top-notch. Roth absorbed me into her world from page one, so much so that I read the entire trilogy in less than a week…with the second two being read within a 48-hour time period. I suppose I should say something in regard to the huge spoiler in Allegiant that I’m sure you’ve all heard about, whether you know what it is or not; it doesn’t bother me. Maybe because I was (unfortunately) exposed to the spoiler by someone who was careless online, or maybe because I knew that many people didn’t like the ending because of this giant spoiler, I don’t know, but I thought that this particular spoiler brought something full-circle in a bold way. Like I said, no spoilers here, but if you’ve read the books and are curious to read the author’s reasoning, check out this super-spoilery blog post on her website (you’ve been warned).

Veronica Roth’s Divergent trilogy continues to prove that the world of Young Adult fiction has quite a bit to offer – and that it isn’t strictly for young adults to read. These are young characters, yes, but they go through very adult situations, and the way they react to these situations and how they grow from them can teach us a lot about ourselves no matter our age. I haven’t read something entertaining and engaging in this way in quite a while; I’m looking forward both to reading it again in the future and to seeing the movie soon.

“I believe in ordinary acts of bravery, in the courage that drives one person to stand up for another.”