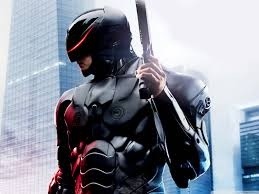 I must confess to not having seen the original 1987 RoboCop film, so you unfortunately won’t get a comparison of the old to the new here. However, that also means that this is a review from the perspective of someone who watched the movie just to watch the movie rather than to look for comparisons.

RoboCop stars Joel Kinnaman as police detective Alex Murphy, who is nearly killed by a crime boss for getting too close to his business. Thanks to Raymond Sellers (Michael Keaton) and Dr. Dennett Norton (Gary Oldman) of OmniCorp, however, what is left of Murphy is merged with the latest robot technology, making him a lean, mean, crime-fighting machine, as well as saving his wife (Abbie Cornish) and son from having to mourn his death. But things get complicated when the question arises: who is more in control – man or robot?

I actually – surprisingly – enjoyed the film. It wasn’t one that I was particularly looking forward to, but I decided to give it a chance and was pleased with the result. Gary Oldman is the standout performance for me; his character’s internal conflict – do I do what’s ethical or what I’m told to do? – is well-acted and makes us sympathize with him rather than hate him for his actions. Michael Keaton as Raymond Sellers is also great. I haven’t seen Keaton in a true “bad guy” role before, though Sellers isn’t a “villain” in the traditional sense…he just wants money. Joel Kinnaman as the eponymous robotic cop does a decent job as a robot, but I didn’t think he played the human side of the character very well, even at the start of the film when he wasn’t yet part robot. He played the character almost completely emotionless, almost to the point that he was completely monotone.

The real problem with this movie is that characters don’t make reasonable decisions. Sellers randomly turns murderous toward the end of the film, which doesn’t make sense, and Murphy’s wife’s reaction to security alarms going off after confronting Sellers is to turn against what she just said about not wanting to see or speak to Sellers again and joining him on the roof, which is mostly just for the convenience of the plot.

That being said, there was a scene or two that got me emotionally involved, such as the scene when Murphy first comes home to his wife and son as family, but that tension is never built upon any further. In fact, there’s a moment in the film when RoboCop, now under the full control of the organization rather than his own free will, is told about his son’s social problems resulting from his father’s absence. This information sparks a change in Murphy, and he returns home, but instead of trying to amend his relationship with his family, he starts investigating his own murder. I would have liked to have seen some sort of reconciliation between him and his family at this point rather than saving it for the very end of the film.

In the end, this movie turns into more of just a generic action movie, albeit a mostly entertaining one. The visuals and technology displayed are impressive, and the action scenes were enjoyable, but too much of the story and character relationships were not given justice. Even the music score by Pedro Bromfman was sort of hit-and-miss for me; he utilizes the original theme from the 1987 film, which just doesn’t make sense to me. If you’re going to reboot a film, why not reboot everything like composers have done with Batman Begins (2005), The Amazing Spider-Man (2012), and Man of Steel (2013)? The theme was too 80s for me, which probably worked for the original film but felt out of place here, as did most of the rest of the score. The themes of biased media, family, and morality that the filmmakers tried to emphasize were not developed as well as they could have been, but, like I said, RoboCop is an at least decent action movie that I thought was fun to watch. I can’t speak to how it compares to the original film, but it’s still worth watching at least once.

MPAA: PG-13 – for intense sequences of action including frenetic gun violence throughout, brief strong language, sensuality and some drug material