Note: this film was the main topic of discussion on Episode 10 of my podcast, The Cinescope Podcast. Give it a listen for a more in-depth discussion! 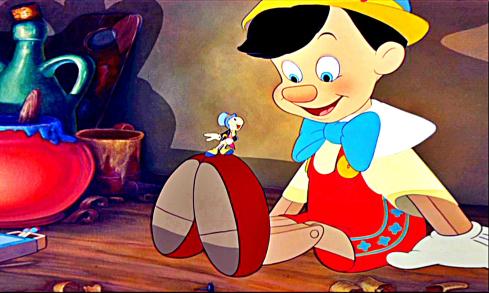 I grew up during the Disney Renaissance of the 1990s, so while I did own and watch many of the older Disney films like Cinderella, Sleeping Beauty, and The Jungle Book, the ones that stick out most in my memory are the ones that released during my childhood. Pinocchio was one of those films that I definitely owned and watched at some point as a kid, but upon rewatching it I became aware of just how little I remembered of it – and how fantastic of a film it is.

Pinocchio is the classic tale of a puppet lovingly crafted by woodcarver Geppetto. After wishing on a star, Geppetto is astonished to find his wish has come true – Pinocchio has come to life! Still made of wood, the puppet must prove to the beautiful Blue Fairy that he is capable of being brave, truthful, and unselfish in order to become fully human. Guided by a cricket named Jiminy, Pinocchio learns the dangers of lying and disobedience as he sets out on a journey to become a real boy.

When watching this movie as an adult, I’m struck by the beauty and quality of the animation. As we see the streets of the city from the perspective of the tiny Jiminy Cricket, we are treated to an incredible level of detail, and during the final chase with the whale Monstro, every stroke of the brush can be seen in the water – and every single frame is drawn completely by hand, i.e. without the use of any computers. This movie is a work of art, and it’s a true testament to human ingenuity.

One of the most endearing parts of this movie is the character list. I’m actually pretty surprised that I didn’t like this movie more as a kid because watching through now, I was completely hanging on every word that Jiminy Cricket spoke. He’s simultaneously clever and stern, and he’s even occasionally funny, even to the point of toeing the line along the fourth wall a couple of times. He also serves as the audience vantage point for much of the movie; because of him, we bear witness to the creation and “birth” of Pinocchio, and as he follows Pinocchio on his journey through the city, we are able to tag along because we see things through Jiminy’s eyes. Voiced to perfection by Cliff Edwards, Jiminy is easily one of the most endearing characters in all of Disney film history.

Speaking of Pinocchio, he’s a fun main character because he’s believable. He’s a kid in appearance and behavior, and he’s as curious as any toddler would be, constantly asking questions that start with “why?”. His naïvety is funny at first, but it also gives a reason for Jiminy to tag along; he’s not capable of truly knowing right from wrong just yet because he has only just entered the world. His emotions run a wide range and never go past the point of believabilty. We feel his joy, sorrow, and remorse as he feels them because he feels like a real character with real motivations. Plus, he’s adorable!

Other characters that stand out are Figaro the (house) cat, Cleo the goldfish, and Gideon the (antropomorphic) cat, all of whom are mute characters who communicate instead with their actions, allowing for a hilarious mix of human and animal characteristics. The villains, namely Stromboli, the Coachman, and Monstro are all properly despicable and (especially in the case of Monstro) terrifying, which honestly probably contributed to the reasons why I didn’t watch this movie much as a kid.

The story is pretty simple here, but that’s the genius of it: because the story is simple, the artwork/music and the lessons come to the forefront. Pinocchio is given very clear choices between right and wrong, with Jiminy pointing him in the right direction and him instead choosing the wrong direction and subsequently suffering the consequences. When Pinocchio finally does the right thing and follows Jiminy’s advice and shows his bravery and truthfulness, he reaps the benefits, becoming a real boy as it was promised to him. It’s a very clear lesson for children who are watching – if you do the right thing, you benefit. If you do the wrong thing, you suffer.

And speaking of the music, it’s all great here. Songs like “Little Wooden Head”, “Hi Diddle Dee Dee”, and “I’ve Got No Strings” are complete earworms, but the true classic here is definitely “When You Wish Upon a Star”, sung marvelously by Cliff Edwards’ Jiminy. The lyrics are inspiring, the music is beautiful, and Richards has one of the most pure, gorgeous tenor voices I’ve ever heard. It’s certainly deserving of the Academy Award it won!

It’s hard to believe that this movie was made more than 70 years ago because it really does stand the test of time. Pinocchio is charming, beautifully animated, and is a true classic in every sense of the word. Whether you’re a child or an adult, you owe it to yourself to check this movie out and simply enjoy this lovingly-made film.