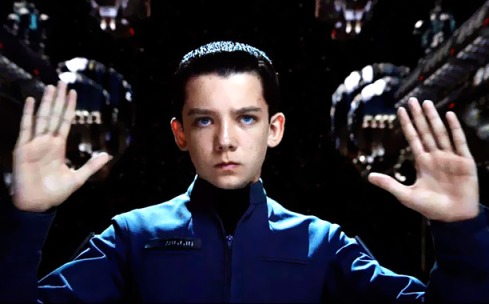 Has there been an excess of book-to-film adaptations this year, or is it just that I’m attending most of them this year? In any case, I’m not complaining…adaptations of books give me good excuses to set aside the time to read the original book. I had no knowledge of the existence of Orson Scott Card’s 1985 science fiction classic Ender’s Game until I heard word of this film being made. The trailers for the film sparked my interest a bit, but I had no idea how much I would enjoy the book when I finally picked it up to read it a couple of weeks before the film’s release…I loved it. So, naturally, I was excited for the film, like I always am for adaptations of my favorite books, and, like so many other book-to-film adaptations this year, the filmmakers did a great job.

Ender’s Game takes place in the unspecified future, sometime after the second invasion of an alien species (called “buggers” or “Formics”) nearly destroys human life on Earth. In anticipation of an imminent third invasion and convinced the humans’ victory in the second invasion was only due to luck, the International Fleet turns to the youth of the world as the next generation of great commanders. Enter Ender Wiggin (Asa Butterfield), a genius child who possesses the potential of being the greatest commander that the IF has ever seen. Ender must complete both Battle and Command School in order to lead the fleet against the Formics before time runs out and the human race is wiped out.

This year has also been a good year for casting in these book-to-film adaptations, and this film is no exception: Asa Butterfield is a brilliant Ender Wiggin. He perfectly portrays all facets of the character – focus, determination, despair, vulnerability. He successfully holds his own against veteran actor Harrison Ford as Colonel Graff, a feat not easily matched by other actors at Butterfield’s age. Speaking of Harrison Ford, I have one word to say regarding his performance: FINALLY! It has been quite a long time since I last saw Ford in a role that I thought he did really well with, but I think that he really brought a lot to the character here. He is firm and, to a point, ruthless, but cracks appear when his decisions are held up to the light, which is exactly the way it should be. The role of Major Anderson is gender-flopped from the book, but it works with the aid of Viola Davis, who brings compassion to the character in light of Ender’s situation and the pressures placed upon him. Sir Ben Kingsley as Mazer Rackham, the commander who defeated the Formics in the second invasion, plays the character with the appropriate level of fierceness – he’s pretty much just the way I imagined him in the book, which is always a nice touch.

I have two minor quibbles in regards to casting – not that I think they were bad choices, but that I think there were better options available. Hailee Steinfeld plays the character of Petra as she written admirably, but the way she is written in the film contrasts with how I remember her being described in the book; I pictured a tougher female character, one who wasn’t afraid to throw a few punches at her male peers or curse with the others. In the film, however, she’s almost completely opposite – while she remains a highly capable shooter in the battle room, her character seems much more timid here, watered down so that she may be seen as a potential love interest for Ender. Now, this idea is only hinted at in the film, which I’m thankful for, but it’s still hinted at in a couple of scenes. My other minor complaint is with the choice of Moises Arias as Bonzo Madrid, the commander of Salamander Army in Battle School and antagonist to Ender. Arias plays the character fine as far as his attitude and general demeanor, but he’s also tiny, which, in my opinion, makes him much less of a threat. I don’t remember how his size was described in the book or if it was even mentioned at all, but the fact that Ender looked down on him bothered me because it seemed to lessen the extent of their very important rivalry. (Also, I must admit, the fact that he played a character in Disney Channel’s Hannah Montana TV show might have made it difficult for me to take him seriously as well…)

One of the best aspects of the film is how it brings the locations of the film to life so beautifully; the exterior design of the Battle School is awe-inspiring, and the Battle Room and the battles between armies that take place inside help us to visualize some of the more active scenes in the book, scenes that almost require the visual aid in order to experience them fully. The design of the simulator at Command School is similar, despite the fact that it deviates a bit from the description given in the book. The way it is presented absorbs you fully into the environment, allowing you to experience the incredible interaction that Ender feels while operating and directing the fleet…these are the types of scenes that were designed to be seen on the big screen. The mind game sequences on Ender’s tablet are truncated quite a bit for time’s sake, but they still work really well in setting up the ending of the film.

The ideas of necessary (?) violence and the morality of what the IF is doing here are brought into question here, as they are in the book, though they are admittedly more diluted here. Is it right to force these kids into violence with each other, even if it turns them into more efficient military commanders? Do Colonel Graff, Mazer Rackham, and the rest of the IF have the right to withhold important information and/or the truth from Ender during the course of his training even if it means that he saves the world from a third invasion? These are hard-hitting questions with serious implications, and they are presented well in the context of the film, especially when Ender confronts Graff face-to-face at the conclusion of the final battle at Command School.

My only real complaint for this film is that there isn’t enough…of anything! I can justify all of the creative liberties taken with the author’s story, so that isn’t the problem. The problem is that in the Battle School, we only really are able to see a battle and a half before Ender is shipped off to Command School, where we see brief snippets of two or three battles before being treated to the final battle. These sequences are the coolest in the film, but they are so brief that we don’t get much of a feel for Ender’s military genius aside from the fact that we’re told by Graff and others that Ender is a military genius. In the book, we witness Ender’s growth as he faces opponent after opponent in the battle room, and, no matter the odds, he always wins! We know he’s a military genius, but the trick is to show us being one rather than simply telling us. I’m also slightly disappointed by the fact that Ender’s siblings’ roles are reduced so significantly; I didn’t need their entire subplot, but the issue here is that it is Ender’s relationship with his siblings and how his personality differs from theirs that makes him who we is, so we are missing a huge chunk of Ender’s personality since we are missing that aspect.

I loved this film. It’s a great adaptation of a fantastic book, and, despite the fact that I had some minor disappointments with what made it into the film and with what was significantly reduced, it is well-cast and well-told, and the musical score by Steve Jablonsky, who I’m not normally fond of (he is most known for his work on Michael Bay’s Transformers trilogy), is his best work yet. Ender’s Game manages to take the themes and questions presented in the book and mostly keep them intact, albeit a bit watered down. I can’t imagine a fan of the book disliking this film because it so vividly and admirably brings Ender Wiggin and his story to the big screen.

MPAA: PG-13 – for some violence, sci-fi action and thematic material