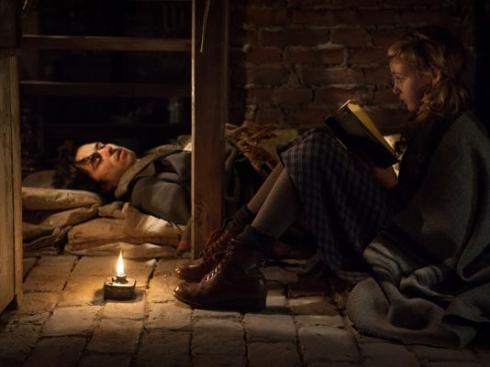 More and more often, as books are being adapted into movies for the big screen, I find myself reading the books before I see the film, a habit that I had as a child but dropped as I grew older. When I read Markus Zusak’s The Book Thief for the first time, I was completely absorbed; the writing was beautiful, the characters were fantastic, and the combination of setting and plot was heartbreaking. The end of the book destroyed me emotionally like no book has done in quite a long time…needless, to say, I had high hopes for the film adaptation. Could they successfully adapt such an incredible book into an at least decent film? The critical rating over on RottenTomatoes.com had me worried, but, rest assured, I can personally attest to the fact that this film is much better than the critics would have you believe.

The Book Thief begins in 1938 and tells the story of Liesel Meminger (Sophie Nélisse), who, at the start of the film, is on a train to Molching, Germany with her younger brother and mother so that she may be fostered into the care of Hans and Rosa Hubermann (Geoffrey Rush and Emily Watson, respectively) after the departure of her father. On the journey to Molching, however, her brother dies, and, at his funeral, Liesel finds a book, stealing it as a reminder of her brother, in spite of her inability to read. When she arrives at the Hubermanns’ house and her mother leaves, Hans begins to teach Liesel how to read, and she befriends a neighbor, Rudy Steiner (Nico Liersch). The Hubermanns lives change forever when a Jew, Max Vandenburg (Ben Schnetzer), arrives on their doorstep, seeking protection based on a promise made by Hans to his deceased father. The rest of the film tells of the growing friendship between Max and Liesel, Liesel’s increasing thirst for reading, and the survival of a poor non-Nazi family living in the middle of Nazi Germany during World War II.

The first thing I should say is that, though this is far from being perfect, it’s a decent adaptation of Zusak’s original book; I literally saw the film on the same day I finished reading the book for the first time, so everything was fresh on my mind, and there weren’t any changes made that really upset me. The film’s greatest strength in translating from the book is its casting. Sophie Nélisse is brilliant as Liesel, bringing to the role the appropriate naivety and innocence to a girl of her age during this time, but she also brings out the fierceness and determination of the character, ensuring that she holds her own against an actor as established as Geoffrey Rush. Speaking of Mr. Rush, he settles into the role of Hans “Papa” Hubermann so effortlessly that you’ll want him to be your Papa from the moment he first speaks. He successfully communicates all the different personalities shown by Hans in the book, from the kind gentleness he shows Liesel when she first arrives, to the determination exuded upon the arrival of Max, and the remorse shown upon revealing what danger he has put his family in by standing up to the Nazis. Emily Watson as Rosa “Mama” Hubermann makes the character as mysteriously multi-faceted as she appears in the book as well, with her outwardly rough, coarse behavior making her rare moments of vulnerability and intimacy all the more poignant and emotional. Though these three are the shining stars in this film, honorable mention goes to Ben Schnetzer as Max and Nico Liersch as Rudy, both of whom give excellent performances too.

The critical consensus at RottenTomatoes states that the film plays it too safe with its Nazi Germany setting, which I actually agree with. I generally do my best to not judge a book-to-film adaptation based on its quality/accuracy in regards to the book, but this particular adaptation, despite being a great film overall, is definitely a bit too watered-down. Many of the darker aspects of the book, such as Rudy and Liesel stealing, Liesel’s relationship to the mayor’s wife, Rudy’s rebellion against the Hitler Youth program, and the Jews being marched through town to the Dachau concentration camp, are either barely touched on or simply skipped over, providing the film with what I would personally consider to be missed opportunities. For example, the Jews are actually marched through town once in the film, but it is never explicitly stated what the purpose or final destination is; yes, it is implied and should not be difficult to figure out given the context, but the scene is so brief and only happens once, so it is difficult to take away any real emotion from the scene as presented in the film. In contrast, though, there is one particular scene that stands out to me as being particularly powerful. Liesel is standing and singing with the choir at her school, and the music sounds lovely in their high, sweet voices. However, captions across the bottom of the screen reveal the anti-Jewish lyrics being sung, and the camera cuts to scenes of Nazis raiding Jewish homes and taking the families away. It’s a sobering scene, with the juxtaposition of the innocence of children and the realities of Nazism.

Another complaint I have about the film is that I worry that some aspects weren’t explained well enough for non-readers to understand, namely the inclusion of Death as Narrator, as he is in the book. The book is told entirely from his perspective, which is why it works so well; I mean, who better to tell a story that takes place in Germany during World War II than Death himself? But it doesn’t work so well in the movie because Death’s narration only interrupts the story two or three times throughout the course of the film, and I mean exactly that – interrupts. If the film had involved him more throughout, it might not have been as awkward, but, unfortunately, that is not the case. Despite the awkwardness, I liked Death’s voice (Roger Allam), a notion that gives me goosebumps – how profound that the voice of Death be pleasing to listen to?

The best translation from book to screen would definitely have to be the final fifteen minutes or so of the film. I won’t reveal any spoilers, but it’s safe to say that you would be wise to bring a box of tissues. The incredibly emotional ending from the book is kept intact in all the ways that matter, bringing the film to a satisfying and poignant close.

I learned at an early age that you can’t walk into a film adaptation of a book you love and expect the same experience – each is its own art form and therefore must be absorbed differently, without comparison to the other. However, you do have to at least consider how good an adaptation it is, which is why I talk so much about how the film compares to the book here. In any case, though it may seem like I didn’t like the film because it wasn’t as good as the book, I really did enjoy this film for what it was. On the whole, it is a pretty good adaptation, albeit a bit watered down one, but when aren’t film adaptations of books watered down in some regard? The important thing here is that the film’s heart is where it needs to be; the characters are genuine, there are many wonderfully touching moments, the characters are cast and portrayed well, and the instrumental score by John Williams is phenomenal…even at the ripe old age of 81, he continues to prove why he’s one of the best in the business. The Book Thief is good, solid filmmaking and has my full recommendation.

MPAA: PG-13 – for some violence and intense depiction of thematic material