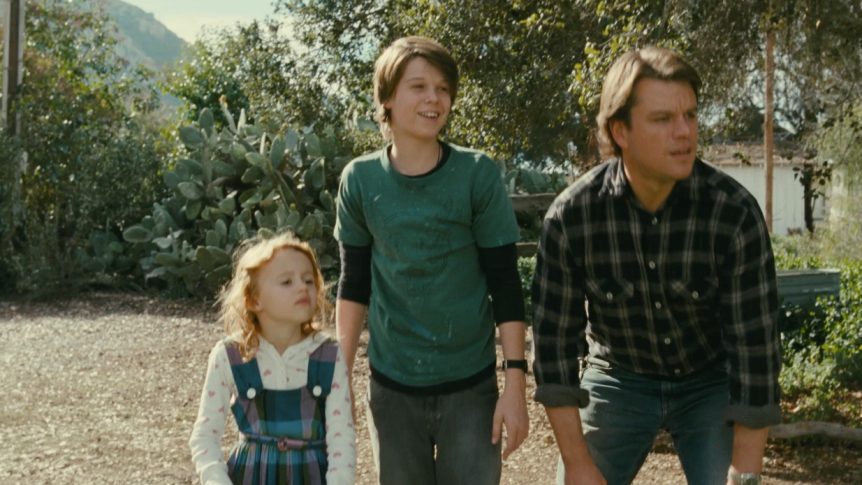 The only Matt Damon films I had seen before this one were the Bourne trilogy and 2010’s True Grit, so it was nice to see him as a less aggressive, more father-like figure in We Bought a Zoo. This film wasn’t one that I ever got excited for, which is why I just watched it for the first time on Blu-Ray, and now, even after watching, I have mixed feelings.

Based on the memoir of the same name by Benjamin Mee, We Bought a Zoo follows a father (Damon) and his two children six months after the mother has died. They’re still hurting and trying to move on with their lives, so it just seems too perfect when the opportunity to buy a zoo rolls around to give them a fresh start. The 7-year-old daughter, Rosie, is filled with wisdom beyond her years, and not just in the “kids say the darnedest things” sort of way; her father literally goes to her for advice or for serious adult conversation more than once in the film. The son, Dylan, is the typical 14-year-old teenager: filled with angst, thinks his father hates him, etc. He is also a talented artist who has recently begun drawing disturbing images, such as a head being severed from the body. Why a dead mother would warrant such graphic drawings, I’m not sure, but, then again, I’m no psychology expert.

In the zoo, there is an aging Bengal tiger who is just about at the end of his life, but Damon’s character, despite the pleas by the lead zookeeper (Scarlett Johansson), insists on doing whatever he can to prolong this tiger’s life. I think that this is supposed to be a metaphor for his relationship to his dead wife and his unwillingness to let her go, but it’s a weak comparison. At least, I certainly wouldn’t equate ending a dying tiger’s struggle for life to a widower’s struggle to move on after losing his wife, but that’s just me. But alas, with the decision to put the tiger out of his misery comes a mended relationship between father and son and a possibility at new love for Damon’s character.

The dialogue was particularly irritating to me at times, mainly because it used “man” constantly, as if this was The Big Lebowski or something like that. It starts with Thomas Haden Church’s character, brother to Damon’s, calling him “man” all the time, but it gets so bad that, near the end of the film, Damon’s character has a yell match with his son, calling him “man” at least 15 times, give or take a few. Its usage does nothing but distracts…it just makes no sense to me! The score by Jónsi was distracting at times as well, sometimes not matching the scene even remotely. However, when it did match the scene, the music did a nice job of sounding the whimsy of the story.

Anyway, while I did have a lot of complaints, We Bought a Zoo worked well as a family film, with Damon’s performance carrying the film and Johansson doing a decent job. Church’s performance felt forced to me, with the fact that he’s supposed to be playing the brother to the main character being nearly completely lost to me; there’s absolutely no brotherly connection between the two of them. Maggie Elizabeth Jones as Rosie will make you smile frequently with her sweet comments and adorable smile, and the story is saccharine and predictable enough to please just about anyone who enjoys that kind of thing. I didn’t dislike it, but it’s certainly not a movie that I would like to own for myself.

MPAA: PG – for language and some thematic elements

I would love to sit here and tell you all that The Bourne Legacy was just as good as any film in the original Damon trilogy, but, unfortunately, I can’t. While I did enjoy it, this is one of those films in which the bad or not-so-great outweighs the good.

The plot was weak and confusing; the entire first half of the film had me wondering what was happening, who was who, and why certain decisions were being made. While this wouldn’t have been a problem if all of my questions had been answered later in the film, most of them weren’t. I think that the film suffered from being set within the timeline of the original trilogy; references would have been fine, but this film takes place during and immediately after the third film, making things feel forced and a bit rushed. It would have been better to see the main character as a member of a completely separate, unrelated-to-Bourne project so that the film could be viewed less as a sequel and more as a continuation with a new focus.

I also wasn’t a huge fan of the whole “chemically-altered super-human” part of the story…it worked for Captain America because he is a superhero set in a different universe with different rules than ours. While this type of chemical altering may eventually become reality in our own universe, it just feels silly in the context of the film; a super-human doesn’t have the same appeal as a highly-gifted and intensely-trained person in a non-superhero world.

I enjoyed Jeremy Renner as Aaron Cross, but I felt that the character’s “motivation” was not adequate enough to justify the full movie. It is not the attempt on his life that motivates him (at least, it doesn’t feel like it is), but, rather, his dependency on some pills distributed by the organization he works for that seems to push him into action; the entire middle portion of the film is watching Cross find a way to get his hands on some of these pills. I also had a problem with Rachel Weisz’s character, Dr. Marta Shearling, a woman who seems to take no issue with the fact that Cross is capable of fighting and killing with apparent ease…there’s not even a moment’s flicker of doubt as she continues on her journey with this violent man. In The Bourne Identity, Marie tried to run away from Jason Bourne when she found out who he was and what he was capable of, only staying because Bourne convinces her that she needs him to survive…for at least a little while. There’s a moment that is sort of like this in The Bourne Legacy, but it is subdued and less effective. She asks no questions and makes no attempts to flee.

Though the character wasn’t as fleshed out as he could have been in the script, Renner as Aaron Cross worked wonderfully as the follow-up to Damon’s Bourne. Renner plays the character with a resolve that almost makes you forgive the rocky motivations that Cross acts on. Edward Norton was excellent in this film. His character, Eric Byer, is in charge of cleaning up after the CIA’s “Treadstone” and “Blackbriar” programs (the programs that created/tried to kill Bourne, respectfully). He’s got a sharp tongue, a firm authority, and a sense of urgency that you can’t help but admire. Another bright part of the movie was the action; Jeremy Renner did a great job with the physical aspect of the character as well, giving us fight scenes that, while not as inspired as the first fights in The Bourne Identity, entertain without becoming too much of a good thing…with one exception. The last twenty minutes or so of the film consists of one overly gratuitous chase sequence…it just takes way too long.

Let’s face it: The Bourne Legacy had quite a – well – legacy to live up to. The original trilogy starring Matt Damon in the title role was excellent in terms of plot, character development, emotion, and action. Unfortunately, Legacy fell short in just about every regard, but just because it isn’t as good as the original trilogy doesn’t mean that it isn’t enjoyable – because it is. The Bourne Legacy delivers plenty in the way of action and humor, and, after his brief screen time in The Avengers earlier this year and his supporting role in Mission Impossible: Ghost Protocol, it was nice to see Jeremy Renner as the main protagonist. Boosted along by a fantastic score by James Newton Howard, The Bourne Legacy may disappoint die-hard fans of the original trilogy, but it is still a fairly entertaining summer action film that will please the average moviegoer.

When I first learned that James Newton Howard was to be composing the score, I was actually a little bit worried – not because of my lack of faith in Newton Howard as a composer, but because it’s such an opposite film from the kinds he normally composes for. When I think Newton Howard, I think beautiful, flowing melodies, rich orchestra, and perhaps a warm brass fanfare or two…I certainly don’t think “action film”. John Powell composed the scores for the original Bourne trilogy, so I was surprised that he didn’t return. Despite my reservations, however, Newton Howard did a splendid job.

I have two favorite things about this album: 1) the opening track, “Legacy”, contains the main theme for Bourne as heard in the opening track of The Bourne Identity‘s score, “Main Titles”; 2) the closing track is an updated version of Moby’s “Extreme Ways”, featuring a more orchestral accompaniment and the subtitle “Bourne’s Legacy”. “Extreme Ways” played in the end credits of all three Matt Damon Bourne films, so it’s nice to see it return.

Aside from those two tracks, much of this score is a lot more…”much-ier” than John Powell’s original scores. Newton Howard uses some of the same electronic orchestration, but he combines it with an orchestra in a way that is consistently action-packed and suspenseful. Whereas much of The Bourne Identity‘s score was a bit minimal, The Bourne Legacy‘s score features tracks like “Drone”, “High Powered Rifle”, and “Magsaysay Suite” that are much bigger and decidedly not minimal.

That’s not to say that Newton Howard sacrifices the kind of music I know him for in favor of this new, aggressive style. In fact, his traditional style of music is also featured throughout; in “You Fell in Love”, we hear a somber melody that starts dramatically in the low string part before the high strings take over and just about break your heart. Another track, “Aftermath”, opens with long, sustained strings that seem to emulate great loss or tragedy. This builds into a strong, full string orchestra that hints at a mission unfinished and more to come.

One thing I miss from The Bourne Legacy‘s score, though, is a consistent motif that is heard throughout the film that lets the audience know that something is either happening or about to happen. In Powell’s original score, you can hear what I’m talking about in the track “At the Bank”; this motif is catchy, prominent, and featured throughout, and it trains the audience to know that something awesome is going on when you hear it. There’s nothing like that (that I’ve noticed) in Newton Howard’s score, unfortunately.

Despite that small complaint, I’m overall pretty pleased with The Bourne Legacy‘s score. It keeps you sitting on the edge of your seat – or, if you’re standing, on your toes – throughout, and it supplies plenty of both compelling action and emotion, showing that this job is not just about killing people…it’s about finding who you are and doing something about it. James Newton Howard’s deviation from his normal style is refreshing and opens plenty of doors for both his career and for the continuation of the Bourne film series. This score definitely has me even more excited to see Jeremy Renner in the new film next week!