Tag Archives: the wrath of khan 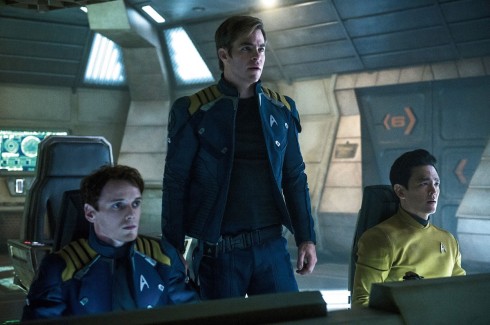 JJ Abrams’ 2009 Star Trek film was my first introduction to the franchise, and, looking back, I’m still quite fond of that movie. While I initially quite enjoyed his 2013 followup, Star Trek Into Darkness (my review), here we are three years later and I’ve still only seen it the one time I saw it in the theater despite owning it on Blu-Ray…it just isn’t a movie that really stuck with me or demanded rewatches. That being said, I was wary of director Justin Lin – most known for his ventures in the Fast and Furious franchise – taking over for the third installment, but…wow. What a great movie!

Taking place three years after the events of Star Trek Into Darkness, Star Trek Beyond places the beloved crew of the USS Enterprise in deep space, exploring new worlds and seeking allies for the Federation. Shortly after arriving at Starbase Yorktown, the crew, still led by Captain James T. Kirk (Chris Pine), is sent out on a rescue mission into an uncharted nebula, where they are attacked by a creature named Krall and his massive crew. With the Enterprise destroyed, the crew separated, and hope diminishing, Kirk must find a way to rescue his crew and to save the universe at the same time.

It should be noted that all three of the new-Trek films so far noticeably borrow from what is widely regarded as the best Star Trek film, The Wrath of Khan (my review): Star Trek utilizes the Kobayashi Maru test that was first introduced in TWOK, Star Trek Into Darkness uses its main villain and directly imitates entire scenes, and Star Trek Beyond explores the same themes of mortality and sacrifice. I would argue that Beyond does this with the most success because it takes familiar themes and applies them to the different situations that the characters find themselves in rather than lifting direct story or scene elements, making the comparisons more subtle and therefore more effective. I can also give this movie the same compliment that I gave TWOK: it feels like an extended episode of the TV series in all the best ways. It really is masterfully done.

The characters this time around are established and don’t require the “set up” that they received in the first two films; they’re now largely the characters we know and love from the original television show and movie series. Chris Pine’s Kirk is a leader who is confident in his abilities and his responsibilities as a captain, but he’s also at a point in his life where he doesn’t know what’s next for him. It’s not that he has insecurities but rather that he is struggling to find the meaning of their continued exploration in uncharted space. We’re able to see his growth over the course of the film as he realizes that his crew is his family and that he would be out of place if he was placed anywhere aside from the bridge of a starship (the same conclusion William Shatner’s Kirk reaches in The Wrath of Khan through different circumstances). The introduction of his famous “captain’s log” in the new-Trek franchise is also an excellent touch.

As captain, Kirk continues to be the main character, but the supporting characters are definitely not tossed to the side here; in fact, we get many great moments with each of the classic members of the crew. Spock (Zachary Quinto) and Bones (Karl Urban), two characters with a history of a somewhat antagonistic relationship, are paired together for much of the film, resulting in some hilarious banter but also some tender moments of expressed friendship and overcoming obstacles. Scotty (Simon Pegg), Sulu (John Cho), and Uhura (Zoë Saldana) all get their moments in the limelight as well. Thankfully, Anton Yelchin as Chekov is given much screentime as he’s paired with Kirk; his work here only continues to show how truly devastating it is that he has left us so soon. Lastly, Sofia Boutella as the newcomer Jaylah was fantastic as a strong female character who was able to hold her own, and, in fact, much of the film would not have been possible without her character’s actions.

I think this movie’s biggest issue is its villain. Idris Elba is an incredible actor, and he did an admirable job here as Krall, but an actor can only do so much when hidden behind that much CGI. His character’s motivations are revealed towards the end of the film, and they’re understandable to a certain extent, but I think that as the antagonist his main purpose was definitely to provide a scenario for our heroes to grow and interact with each other in meaningful ways. The visual effects behind Krall and his fleet of bee-like ships was very well done and made for exciting action sequences. While I’m mentioning technical effects in the movie, I’d be remiss if I didn’t bring up returning composer Michael Giacchino’s wonderful score; his universe building is fantastic and continues to offer some of the best sci-fi music out there. And, of course, I have to say how awesome the pop music used is, in one scene in particular…I won’t spoil it here, and I certainly wouldn’t think that a scene like that would ever appeal to me, but it’s possibly the most fun scene in the whole movie.

I’ve said a few times recently, like in my written review for Blade Runner, that what sci-fi as a genre does best is ask questions and present new ideas, and Star Trek Beyond does that extremely well. It asks us to consider mortality and our friendships with others, and it does so within a fantastical setting that keeps us engrossed without distracting us from the point. When I learned that Justin Lin was directing this movie, I was concerned – Fast and Furious lies far outside my usual range of interest – but I could not have been proven more wrong; he accomplishes so much here with an amazing script by Simon Pegg and Doug Jung. Star Trek Beyond is without a doubt my favorite of the new Star Trek films, and it makes me even more excited for future films in the franchise.

MPAA: PG-13 – for sequences of sci-fi action and violence